The announcement that Their Majesties, King George and Queen Elizabeth, would visit Canada was received with great joy by all classes of Canadians. Their visit was to be of historic interest as they were the first reigning British Monarchs to cross the Atlantic. Canada, therefore, awaited with anticipation the news that the liner, the Empress of Australia, with the royal visitors on board, was approaching the Gulf of St. Lawrence with her convoy of cruisers, the Glasgow and the Southampton. As the Empress neared the end of a twelve-day voyage from Portsmouth to Quebec, Canada's first official welcome to Their Majesties was extended by the Canadian destroyers, the Skeena and the Saguenay, which met the royal squadron in Cabot Strait. 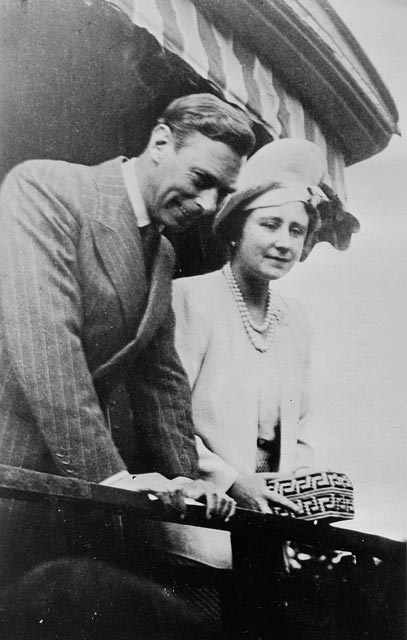 After receiving the King's congratulations on their splendid appearance, the sail across the Gulf and up the mighty St. Law­rence followed. On the morning of May 17th the Empress steamed into Wolfe's Cove above Quebec City amid a deafening volume of cheering, combined with the ringing of bells and the blowing of ships' whistles.

Prime Minister William Lyon Mackenzie King and Justice Minister E. Lapointe went aboard and extended the welcome to Their Majesties.

Immense crowds had gathered and an enthusiastic welcome was given the royal visitors upon stepping ashore. After re­ceiving Canadian Privy Councillors, members of the Dominion Cabinet and provincial and civic leaders, the trip to the pro­vincial legislative building followed, where the Lieutenant-Governor, E. L. Patenaude and Premier Maurice Duplessis greet­ed the royal pair officially. The banquet provided by the Domin­ion Government in the Chateau Frontenac closed an eventful day.

Next day the royal visitors departed from the old French Canadian capital to start their history making tour of Canada. A special train in blue and silver carried them to Three Rivers and Montreal where a wonderful reception was accorded Their Majesties by the mayor and civic officials. The civic ban­quet was given in the Windsor Hotel.

Then Ottawa became the scene of a magnificent welcome by official Canada. Highlights of the visit to Ottawa were the reception of diplomatic representatives at Rideau Hall, the ceremony of assenting to bills in the Senate Chamber, and next day the trooping of the colors on Parliament Square with the King taking the salute, the unveiling of the National Memorial dedicated to the Canadian heroes of the Great War and the laying of the cornerstone of the new Supreme Court building by Her Majesty, Queen Elizabeth, where she gave an inspiring address.

From Ottawa the royal train proceeded through Cornwall and Brockville to Kingston and then to Toronto where the pro­vincial and civic officials gave Their Majesties a most cordial welcome.

During their brief stay in Toronto the Queen presented colours to the Royal Canadian Scottish Regiment. Outstanding also was the visit of the royal pair to Christie Street Hospital and to Woodbine track to view the running of the King's Plate and the presentation of the Dionne quintuplets to Their Majes­ties, who received them with gracious interest and affection.

Then followed the long trip to Winnipeg and through West­ern Canada where at all points the people vied with those of Eastern Canada in expressing their love and fealty in equally warm and heart-thrilling fervour.

On the return to the east the itinerary lay through South­western Ontario for two days of celebration by the bustling manufacturing and agricultural communities that set the district apart in the Dominion as distinctively as the west is set apart by its wheat fields or the north by its mineral wealth.

The trip through Ontario lay through Sudbury and the Muskoka, Georgian Bay and Lake Simcoe districts, arriving in Toronto on the morning of June 6th. Thence the train moved on through Guelph, Kitchener and Stratford to Windsor.

Ever since it had been known that Their Majesties would make a brief stop in Kitchener pulses ran in quickening tempo in preparations to play host to anywhere from 100,000 to 125,000 people from points near and far, who gathered to welcome their King and Queen.

The Canadian National Railway depot became the official rallying place and every point of vantage east and west of the right-of-way and adjoining ground was occupied by the im­mense crowd, which included thousands of children from the schools.

The day proved exceedingly warm with a cloudless sky which, however, did not prevent old and young from uniting in the tribute of welcome.

The breaking out of the royal standard from the station flag­pole officially heralded the approach of the royal train and voci­ferous cheers mingled with the strains of the National Anthem as Their Majesties appeared on the rear platform and became actualities as far as the assembled thousands were concerned.

Upon ascending the official enclosure the city's welcome was extended by His Worship, Mayor G. W. Gordon, who presented the civic address to the King. Their Majesties next signed the visitors' book after which followed the presentation of a large number of men and women prominent in the civic, social and religious life of the city and district. The visit was prolonged to enable Their Majesties to greet the large number of veterans assembled.

Young boys in Kitchener apparently placing coins on the track over which the Royal Train will pass. Kitchener Station is in the background. Source: National Film Board of Canada. Photothèque/Library and Archives Canada/PA-209847.

Though the entire setting was of simple type there was magnificence in the spectacle. Under the royal standard un­furled for the first time in this community and with thousands of their Waterloo County subjects an excited throng of cheer­ing humanity before them, King George and Queen Elizabeth personified majesty in its finest sense as they smiled upon their people and received from them a powerful surge of homage, fealty and warm affection.

All too soon the visit was at an end and the train carrying the royal visitors moved on slowly, gathering speed on its way to Stratford and Windsor, next day to reach Chatham, London, Ingersoll, Woodstock, Brantford and Hamilton and then Niagara Falls where the majestic cataract was viewed.

Then followed the trip across the international line on the way for a brief visit to Washington and President and Mrs. Roosevelt at the White House. Later the journey included a visit to New York and the World's Fair. The return to Canada was through Sherbrooke and on to Fredericton, St. John, Char­lottetown and Halifax where the Empress of Britain received the royal pair for the voyage home, with a brief stop at St. John's, Newfoundland.

In his parting message the King tendered thanks to the Canadian people for personal kindnesses and the perfect ar­rangements for their tour, and, while Canada's material wealth was fully assured, he wished for her sons and daughters an even greater growth in the stature of mind and spirit.

The Queen in a word of farewell thanked all for the wealth of affection offered them and said what had warmed her heart was the proof Canadians had given everywhere that they were glad to see them and added how glad she was to have seen so many of the women and children of Canada.

Copyright/Licence: The author or authors of this work died in 1964 or earlier, and this work was first published no later than 1964. Therefore, this work is in the public domain in Canada per sections 6 and 7 of the Copyright Act. See disclaimers.